Two day Appleseed calls for my participation, and I have to get away from the computer and cable, find real people and firearms and some story telling... so I drive away from home at eight in the evening all night to get there, five hours and twenty minutes plus stopping for food, fuel and sleep.

Twenty-five shooters on the line, wow! I loved it, how do they get such large groups, well, they do bring the children, come as couples, and are the only Appleseed until 2017 in Northern Idaho. That is how that happens, the Shoot Boss is on top of the event long before the gate opened in the morning, using email to keep the shooters in contact and aware.

Large number of Red Hat instructors, makes almost certain we will do fine, opening introductions and briefing, safety. Then they bring rifles to the line and uncase them. First Redcoat targets tell everyone that there is a lot of improvement ahead. Several of our shooters are on their second Appleseed, since we teach so much in such a short time a second Appleseed is a great way to solidify the shooting skills and ask those questions you didn't know you needed to ask at the first one.

If there was only one detractor, it was the HEAT. I didn't notice it the first day but I didn't sweat which meant I had no excess water to cool off, should have drunk some more. The butterflies, bees and other flying insects thought our spilling excess water from the well was wonderful, they spent a long time cooling down in the puddles on the damp earth. Only one unscored AQT on the first day, and only the First Strike told, but lots of marksmanship instruction for groups and individuals given.  Reinforce and repeat, make them know what the four safety rules are, the six steps to make the rifle safe, the six steps for making the shot. Over and over, trying the young people, finding out what will make this work.  By the time of the final Redcoat we are ready to pack up, now how well did they do on that last thirteen rounds? Well, they did just fine, thank you very much. Just fine.

Instructors dinner is good, lots of sharing of ideas for the morrow and what we saw and thought about the day, then off to a shower and some very solid sleeping.

The second day was the day I earned the big bucks for being there. Being a volunteer means all my payment comes in the smiles and improved performance of the shooters and listeners to our stories about our heritage. I had been fighting a cough for about ten days before I showed up, so it was slowing me down and I am ancient so I walk funny, enough excuses.  Quick reviews, checks of grouping, sight settings and more reviews and the first AQT of the day before lunch. Ah, there are people that know very well what they are about. By this time some of the shooters were shooting everything from the prone with a rest, the rifles do tend to get heavier for those still growing. 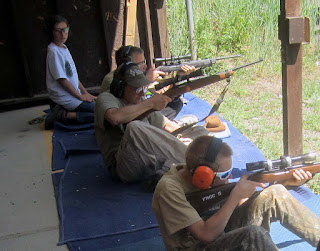 Riley, a fine young lady much noted the evening before, came over to me and asked me to look at her target and score it. She really wanted to know why on Stage one she had only one bullet hole on the target and all the other rounds hadn't touched it. So, it began, I analyzed her shooting from what I saw on the target and gave her one idea for each thing I noticed. Her first score was really not much, less than 129, which means unqualified.   That bullet hole was on the V in the center of that 100 yd target, and nine were surrounding it consistantly... she had been looking at her bullet holes.

Lunch and a Second Strike, then the Third Strike as the afternoon AQT grind began, walked the line, talked a little to the shooters about steady hold factors, making the shot, and watching for follow through and Rifleman's cadence. When scoring the AQTs I would show the shooters where their NPOA had really been, why changing mental focus to the next target would get them a bullet hole between targets. Little things started getting clearer, and the improvement was constant and amazing.

I was drinking more, sweating and hanging in there between bouts of coughing.  Riley kept bringing me her target to score and tell her what I saw, the biggest thing I noticed was the improvement in groups, the improving scores and steady progress.  So it was like 140, then 172 or so, and then the third, her best, of 184. The last AQT was less, but still good for being at the end of a long hot day. The group had a chance to fire the last Redcoat, and then circled up in the far shade as I watched the line.  The announcement of the new Riflemen, and their pictures taken, Huzzah, Huzzah, HUZZAH! That echoes so well in the forested hills of Idaho.

Back to pack up rifles and start the clean up, many hands make light and quick the work. I was on the road heading West as soon as I said some congratulations and good-byes.  Such a fine Appleseed is its own reward, great shooters, and instructor crew...
Posted by Earl at 10:23 PM