They kicked Hal and me out of the library...

I had Men's Bible Study last night at Watson's home. Then came back home and hoped it would be cool enough to sleep later, and after eleven it was getting cooler. My wife closed all the windows anyway - worried about things that go bump in the night.
So Sunday arrives about five AM, and we get up and open the windows, weigh, measure and take pills and get ready to turn on CBS Sunday morning for my dose of culture. Sometimes they amaze me and I am happy. We eat breakfast and prepare for church. We drive off in separate vehicles and she beats me there. I park and go to the church, say hello and shake hands, continuing to amaze everyone that I don't look sick. The service is satisfying and I look forward to adult Sunday school after doughnuts, Erik checks with me and makes sure I will get the rifle, ammunition, reloading items and Biblical references and reloading book after Sunday school. We are about to be real Americans exchanging firearms without government approval. We don't believe in Bloomberg's infringements on the 2nd Amendment which predates buying laws to make one mighty. It is only a communist rifle of WWII fame, and not even semiauto. Still it is a Mosin. 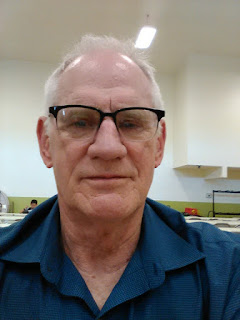 I have coffee after and talk with the men about guy things and such. I am happy, then it is time to go home and I stop at the local branch library on the way home to pick up four reserves. They have reorganized the shelving and all digital media is in a special enclosure to put a paid employee with watchful eye where they can try to catch fools stealing. My books are in the larger shelving area outside and I get them and wander over to check them out. And HAL! greets me from his check out station beside mine. I finish checking out and he continues to talk loudly in my direction until folks and staff start looking at us. One starts to approach and I remind Hal that this is a library and we will have to tone it down a bit.
We must have spent another thirty minutes catching up and volume never returned to quiet and sure enough a very pleasant staff lady shows up to tell us that we are disturbing the patrons.  Hal has less regard than I for rules we never made, but we decide to go outside and continue the conversation. One of our friends from my old church died, and his memorial is Saturday at eleven, and my final day of Vacation Bible School is that day. I will see what I can do. One of my Sunday School students had said hello and asked about my health and I had talked with her a bit and finished teasing her about the amount of make up she was using. She doesn't know how pretty she is without it, and keeps trying to be sixteen while almost twelve. But she will figure it all out one day.
As we finally parted promising to catch up with each other and talk, I did have to tell Hal he had really made my day, and I knew it was already great and meeting him was the really good stuff on top.

If we knew God better, trusted in the LORD more and loved as we were commanded to... you would have no fear of the terror. If you had been on that baseball field this morning fear might rule you, but you would have to take action. The time to concern yourself about what happened and why is after the danger is past and the victims of violence are being given medical care.

We are at that point now. The killer was trying to make good on bad information and lies, repeated loudly. That goes with most terrorists and murderers. Not enough love in their lives. Nothing the government will prevent stupid criminal behavior in the future, all the laws that needed to be enforced were already on the books.  But people are flawed, most unaware and ill informed, they may not make good decisions. Today a sixty-six year old man made EVIL decisions and acted to harm others.  He didn't do it for love. He didn't do it because he was a liberal, a conservative, a party member or a gun owner.

The country has coarsened, the idea one should have good manners is fine, but political correctness isn't good manners. There are words I won't use; profane, vulgar and obscene - just not nice enough to be said in my mother's living room. I used one once and went into shock at my carelessness, or just lack of good sense and manners. In front of the woman that tried to teach me better.  I grew up and worked at being better. It isn't that difficult and a very satisfying improvement over being lazy, rude and generally a fool. 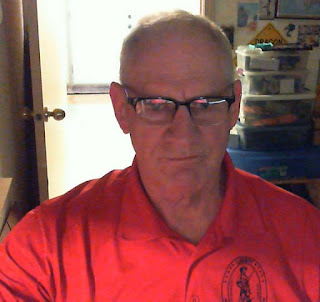 I am not going to worry about more laws and restrictions against firearms, however the government tries to do it. I am not going to worry about anything I cannot affect, focus on the front sight, and for me that is being a better man, the government can't make me one. They can pay me for working for them, they can set the standards and I can leave their employment when they change all the rules and can't convince me they care, they have never cared. People care, but the government is just an idea of the possible without regard to results. Because people think they can influence, control and gain advantage from relationships with the government - they often replace God, {Who does love them), with the government which never will, it has no heart and no soul.

We do need to pray for our enemies, and do good for those that hate us. Example: someone wants to do bad things to me because I think Ron Paul would be a better President and I supported him. I have to confront the enemy with this "I am glad that God loves you enough to forgive you sins, even die for you. I will have to pray for you, like all my enemies, I am told to be better than them and to show them the Way.  Like all exercises, it must be done daily, must be done to the highest standard as I get stronger, faster and more flexible. Love needs just as much care and attention. You and I have been wrong before, and might be again. But we can be and should try to get better than that. Bless all your best, I will try to forgive all the rest."
Posted by Earl at 7:28 PM 1 comment:

No one woke me up for blood drawing this morning... I was released to recover at home Sunday...

Hello there, stranger.  I am remiss been living on love and Facebook, which will never really be the same. 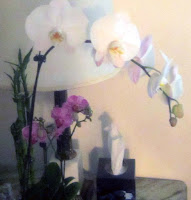 So allow me to fill in blanks from the days between.  I had several medical tests, and kept providing information to make a good judgement call. I had a cancer in my colon, big enough to know it had to be removed. Other tests to make sure it wasn't spreading and that it was my only curable problem. I was sure the surgeon was going to be able to do her job and I would be well. She promised that she would only go to a major cut in me if she couldn't do it by the micro surgery, three small incisions to get tools under the skin (cutters and cameras and stuff to seal the empty place).  I was admitted at five AM Thursday, paperwork processed and signed, saw the doctors and went into prep with the nurse and sleep... My wife was given a number, some concerned friends came by but couldn't wait since it went from three to four hours. Then I was moved to the seventh floor to a room for recovery. All hooked up, So Thursday was spent getting clear headed, measured and setting off alarms. One for my heart rate, one for the oxygen content - if I did mouth breathing the alarm went off. They gave me pills, they fed me through the drip tube from my IV, they made sure I could get up and walk around the desks and not fall over. Moving is good. The surgeon came to tell me it was very good operation, I didn't even need a temporary bag for bowel movements (no food until Friday), the soft diet would work and I was to rest and as I recovered I would be better and better. I got pain pills anytime I asked for them, but I was using the pain to tell me what not to move so I took very few, and as time went on I didn't need them. Last one was on Saturday morning.

I had my wife visiting me daily, pastor and wife's friends on Friday, one of my long time YMCA friends and another brother on Friday evening.. Got prayed upon every visit. On Saturday the Bible Study Men showed up, much more talk, flowers, and prayers. More church ladies. It was nice to hear "You don't look sick!" My doctors for the weekend, started feeling I could go home on sooner and by Sunday morning they came around kicking out to recover better at home. With a complete list of things that I would need to return and get taken care of if anything went wrong. Last visitors came as I was getting dressed to leave, they helped me and my wife pack, wheel me out to the curb and give me more good wishes. 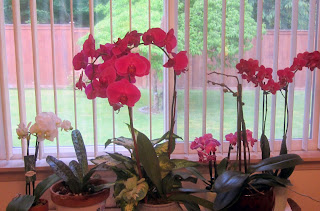 Sunday afternoon, more friends stop by and I give them coffee and we talk. Getting filled in on all the people at church and their prayers. I still get the 'You don't look sick." Cancer is serious, early detection and treatment makes good things better, but we may be feeding our fears and need to trust in the LORD much more. I have known for too many years that death will come, but I have also known for the same time that it isn't the end.

I have a nurse's appointment to remove staples and stitches, and a follow-on appointment with my surgeon. As I get stronger it will be more challenge to take things slowly and completely heal. I have past history of toughing it out too soon. Being a paratrooper and young will be that way. Luckily I am only a fat old man and lazy enough to enjoy recovering and watching the little creatures and birds as I heal.
Posted by Earl at 6:05 AM 3 comments: