Truth is, as Americans, we can do anything we are willing to fight about.

Thanksgiving Day, thank you LORD, for all our blessings, the challenges and work you have set before us, and the strength and skills to work for your glory.

It is a day to remember, and I have spent too much of it on Facebook and photos this morning, the Hallmark Yule Log is burning on my monitor with various singers adding to the holiday spirit, wrong holiday but like Greater California it will all merge on I5 one day.

The family friends memories are enough, I can still taste warm rolls with melting butter from many of my childhood festive tables. Hope your holidays are brighter than the media, you certainly are brighter in love and life than they will ever be. God bless all your best and give your fears a rest.
Posted by Earl at 9:11 AM 2 comments:

Unpacked and cleaned up the Caravan...

Washed all the clothes, repaired the demonstration rifle I always bring for demos. Looking at a better mounting of the laser pointer, although that laser bore sighter doesn't look too expensive. I did like it that Will had one we could borrow. Stepping right up, Will!


So my final Appleseed of the year 2016, is in the history books. I had signed up for only one day, thinking that I had to get back for Sunday school, then the church decided to have combined service for Thanksgiving on the 20th, and that eliminated all Sunday schools. Okay, I get one more day on the range. 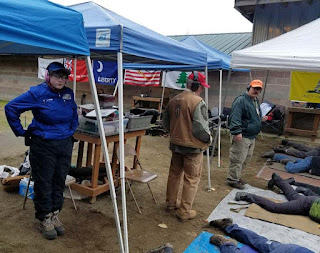 The wind was interesting, the rain not very testing, but the threat was always there. All instruction given, there were some repeat Appleseeders in the line, good for them, and there were brand new to shooting to listen and learn. What didn't seem to happen was converting what we instructed to improved performance in target engagement.... our bad. But the foundation is laid, and will get filled in with study, dry practice and study. See you all on the range again, in another Appleseed event.

Nice meeting you Frankie, I like the M1 carbine better after seeing you trying to master it. My father brought one back to the Continental United States, because he saw its potential in WWII in the Pacific, but then the idea of getting home and getting back into civilian (read 'real life') life loomed and he dropped it off in the amnesty box, because. You did better with the AR, but really, it will always be the shooter not the rifle that makes the difference.

Rebekah, thanks for coming and trying all the positions, so remember next time, you can shoot all you want from whatever works. And I hope you get free of the pains.

Curtis, lots of work on positions, six steps of the shot and NPOA, when the shot is right, squeeze and follow through... practice without bullets. They only add distraction.

The two flankers, Will and Eric, sorry you were on a hillside, but that does happen sometimes. Eric practice both sides, a little more two eyes open pistol and shotgun practice. But you are left handed, shoot that way, practice both ways but always all six steps to make the shot, every shot.  Make everyone of them count.

Trevor and Jerry, thanks for coming and trying to catch all that we offered.  More practice and more relaxing into your position (gravity rules) and your sling.

Steve Cz, you will do better and better, you have a great attitude.  Movses you were working hard to do everything we taught, more practice and study and come on back, it really does work after a bit.

Karl, thank you for the day you spent with us, come on back and thank you for the email that was posted to the AAR by Kimber Custom.  It does mean so much when our shooters speak up, write about the program and think that they will be better prepared next time.

Robert, outstanding shooting, don't you think you are sandbagging now? There is an orange cap waiting for you.  Read Paul Revere's Ride and get excited about Liberty. America would only be Canada without it.. not that Canada isn't a fine country, but they aren't the same.

I went to Port Townsend to work on an Appleseed event, like I have done often enough in the past. It was one of the best Appleseeds I have ever attended, lots of great shooters, listening asking and paying attention to advice - then going and doing even better than we could expect.  Solid, yes I had met and worked with some of them before - but that is like working with the crew that joins you to put on the instruction, the set up and the clean up after.  You would hate going to the range all by yourself and friends and family always can make your experience much better.  Saw two shooters using their sling over their shoulder and back, seems to be something the modern military might teach, it did work.

I had enough persistence to keep suggesting to Bob to use a loop sling, which he finally did and then watched his wonder that it made his groups smaller.  I think he figured using a .308 would make up for accuracy, but he is learning.  I hope to see him in February and find out if he used the dry practice to become even better when he uses bullets on paper.

I enjoyed Alex and Robert on the far left of the firing line, just outside of the canopy coverage and directly under the rain pelting down. It just made them wet, they drove on not worrying about the little stuff.  Since on day two they were awesome and made Rifleman, that concentration in difficulty will be added to my next training day, a guy kind of thing.

Colin brought, Beau, Garret and Indy, and they were having too good a time, but they came to shoot. I couldn't figure out why Garret could shoot so very well on Stage 1, until Colin mentioned he was more of a shotgunner, then it made sense. But I was very happy when Indy made her 228 Rifleman score, so was the shoot boss, Janer.

Aaron was quiet, but taking notes for self, and using his AR like he depended on mastering it. He made Rifleman and promised to drag some of his reluctant friends to another one! Seems folks are still hung up on media myths about firearms, groups that quote Revolutionary War history, and teach rifle marksmanship... well, I have been doing this for eight years and except for slowly falling apart and then recovering (which has nothing to do with the organization or my interest) I do so like being rewarded by smiles and thank you from newly inspired Americans to find out more, this isn't a militia organization.  This is marksmanship and history, glad I could help.
Posted by Earl at 7:35 PM 2 comments:

There are some great ideas generated by the campaigns that neither candidate will live up to...

I was teaching something in Sunday school, first word I used they wanted a definition for (fifth graders) Affluence, and I spelt it wrong. But I was amazed they didn't have it as a base word in their vocabulary... they see daily, just going through their backpacks and parents' automobiles, they know affluent and affluence.

Then I was also teaching about the tower of Babel, and stressed how important it was that they learn a second language.  He who does not know foreign languages does not know anything about his own. ~Johann Wolfgang von Goethe, Kunst and Alterthum. Sounds so much better in German, or Deutch. :)

This isn't about the election, it is about America.  And no matter what the NRA says, the cause is Liberty not freedom, and they aren't the same word. America was founded by breaking away from England, keeping the language with rights to change it, and some some love of law, from, by and for the people.  Immediately, there were power grabs and defaults of debts and responsibility.  But we are better than that.  Most of us down here in the fly over country (and everywhere is flyover country anymore) have much higher values on life, liberty and the pursuit of happiness - but the government seems to taint, corrupt and find convincing ideas to make all of us miserable.  Wondering how it could be so wrong, not seeing the people behind the bad and stupid behavior of our, OUR elected representatives.


Well, I am convinced that government, an institution, does not love the people.  Maybe governments can't have love for anything. The governments do seem to have survival instincts.  And they want to grow, and be more powerful and definitely in charge and paid attention to... I still remember Microsoft getting the treatment from Congress, cause Bill Gates and company hadn't bowed down and sent gifts. I always thought Mr. Gates should have called for inspection of all the government computers and found all the unlicensed copies of Microsoft programs on government computers... it would have been interesting.  My point is government is about power, centralizing it and holding it against all others.

And the folks working for the government hardly ever have a great idea, they always fall back on force to make sure things go the way they want them to, and the people hardly ever know the people behind the need to make things happen. A layer of underemployed but overpaid lawyers and former public servants muffle any outcry of complaint about somethings that stink at the local level but are too far away from the media and the powers that be enriching themselves.


So tomorrow, people will be elected to offices, and none of them are leaders - they could be leaders, but most Americans will go their own way always.  Serving in office means just that - serving.  Not ruling, there isn't any ruling without nobility and kings, there is service, and it is supposed to be public service.


I want the same classification on the government forms that the IRS demonstrates so well. There is no block for racial identity, because money doesn't care.  Should be the same on everything else the government does... no block on racial id.

Stronger together is true, and only those that want to divide us, are looking to control our participation. Do your own thing, liberty demands it.