How do I get so fortunate? Marksmanship and Heritage and rain in Washington State.

Drove to the Interlake Sporting Association place in Redmond, just outside of Kirkland, off of exit 18 of I-405. And promptly got lost and confused, until I stopped at a motel and the desk clerk printed me a map.  Parked and greeted the Shoot Boss and SBiT, and helped set up, then went to meet and greet those shooters arriving for Appleseed. Very young professional friendly bunch of patriots, interesting that there weren't any children and I was the only ancient of days gone by. Have I mentioned rain, yes, there in the title. This is the ending of the raining season... so being some level of wet and cooled was a constant. Tarps on the ground and and two lines of popups kept us focused on the training and our targets. 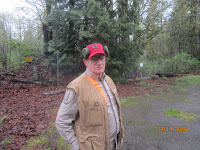 The first Redcoat target didn't amaze the Appleseed crew, but I hope it convinced all the shooters that they had some skills that needed honing. Step by step, inch by inches minutes and clicks the groups shrank and the shooters relaxed and started adjusting one thing at a time. Still the rain came down. the demonstrators were posing on a wet shooting mat in a rapidly filling lake. Only three Appleseed crew for the seventeen shooters meant that I wouldn't be locking names in my memory very quickly, and I was line boss many times as Ben and Andy did training and demonstrations.             During lunch I put my GPS back into my vehicle, I haven't figured out the app on my new machine for finding my lost.  Becca is a new shooter and Ben has to remind me about the Ruger 10-22 and releasing the bolt, tap it and it will come.  Morning adjustments to slings and stocks and prone steady hold factors. More single point slings than I have seen before on rifles, and the shooters often seem slicker than I will ever be on adjusting them. Nat, the Blue hat, is keeping us in targets and making the admin easier during signup. New t-shirts for this weekend, Ben even gives me an Appleseed pin, which will go on my wide brimmed hat. I get out my Gortex camo parka, because the rain really is coming down, I put the work vest over it. 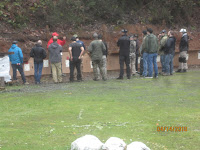 I teach sitting and the NPOA adjustments and the afternoon starts after the first two strikes of the match are told by Andy and Ben.  More positions, the carding the sights and ball and dummy are taught, and we start to put it all together for one AQT and the final Redcoat target of the first day. Getting colder and wetter, Ben puts us into the clubhouse for my telling of the Third Strike of the match, and puts me on the clock, which I made with a minute left... hope everyone realized I had so much more I could have added.
Afternoon Redcoat numbers are much improved over the morning one, something is working. We clean up and take down the popups for the night, the wind is unpredictable and the rain keeps a comin'. 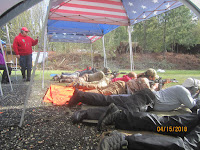 Ben doesn't mention the vitamin 'i' for pain relief, but seems everyone got home, warmed, dried, fed, rested and sheltered fine because on Sunday - we gathered again.  we get two more crew the second day, and I get to give away an orange hat to our new ITT, the blue hat has hers.  Refeshing all that was taught the first day goes quickly after the Redcoat, and that Redcoat is better still. The third Redcoat is normally the best group scores, tired sets in by the last one of the weekend. The cloudy gray skies are fading to blue, wind is constant but the rains are holding off - and seems like we are drying out today. Ben calls me over to help Brian with making a sling with a 1907 model leather sling, since I use one. Leather Sling and Shooting Positions by James R. Owens is my reference manual. But YouTube probably has some video about it. The sling helps him get several Rifleman scores in the afternoon. All the shooters are getting better although, mechanical and ammunition will always seem to frustrate at the wrong times. Everyone keeps working through their individual challenges. Justine is interesting, he has a camera to take pictures of his shot, at the end of his rifle. The number and amount of technology in sighting systems and rifles amazes me, but then I know it is always the shooter, not the firearm that has the most control of performance.  After two AQTs in the morning, and about four in the afternoon a break at lunch for dangerous old men, and a break to prepare for KD presentation by Andy and the presentation of several well earned Rifleman patches. 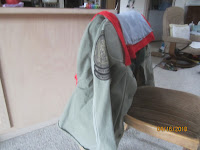 Somewhere on stepping up to help a shooter I fell down, helped the shooter clear her rifle and re-engage the target, I blew my ankle out. That was it for real walking mobility, I sat, moved a bit slowly and got to my vehicle. I found a better sling for Brian and gave it to him as they fired the last Redcoat and began the clean up. Then I left and drove quickly home to recover, ice pack for a few hours, then hot soak and napped during both. Ate my dinner and caught up on my wife's weekend.  Wash the clothes, sleep and start to slowly unload the mailbox and my vehicle - have to get ready to do it again in Coupeville this coming weekend.
Posted by Earl at 9:11 AM