I was correct, the Democratic Party hacked all those Facebook accounts, cause Zuckerberg...

I have been traumatized and in thirty-five years will testify about how devastated I am as I suddenly remember which one I know did me in...

Having broken free of putting my mindless thoughts on the only thing bigger than twitter... I may continue to play here until the Speech Police come up to take my computer away.

In my happier news, I have had a wonderful email from my sister, updating me about her life, challenges and the remodeling of the home she is living in. The pictures are great of the kitchen.

Also my Magpul order showed up. Three ten round magazines for my new (to me) AR, which I still haven't named (Sister Liberty?). And a sling, RLS Rifleman Loop Sling, which makes me wonder if a friend of mine sold his sling design to Magpul. Looks fine except for the nylon web, I like cotton, but I am going to give it all a go.

Tomorrow, pictures and maybe I will sneak off and shoot some rounds to find my zero. But tonight I go out to see Redemption, part 2 of Unbroken. And tomorrow I have Men's Prayer Group. Good night.
Posted by Earl at 6:08 PM 1 comment:

Seems I have been hacked... must be the Russians or the evil LEFTist

I am going to change into gym gear and go workout. 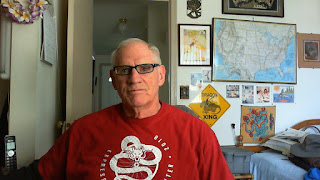 Watched the action of the Senate Subcommittee, and this nation is toast. My America only exists in real people, not performing artists in the media exposure for profit, so it is all for naught. I don't want to learn Chinese, my English vocabulary may be better than most of the talking on television, because I learned mine from books, not movies and television.

Anyway, someone owns my Facebook page, I am not playing Farmville with my sister, who needs my prayers, much more than my foolish.  So y'all are left with my ghost and the haunting of the hacker that stole my (free) membership. Or Facebook folks decided there are too many guns on my page and stroked me out. Doesn't matter, I will not live by AI nor digital device alone.

I did some work on my new AR platform and am looking forward to taking it shooting this weekend. Busy weekend, lots to do on.

I really am an American... so when they are going to oppress me about an AR...

I immediately went to find one I would buy, there are some cheap one around. Had some good suggestions from friends to build one (they don't understand how challenging that would be) but the best answer was 'I am downsizing take your pick of these.' That didn't take but three emails and a meeting set up for today to pick up said AR.  Iron sights and GI web sling, and I was hoping for a magazine, too. 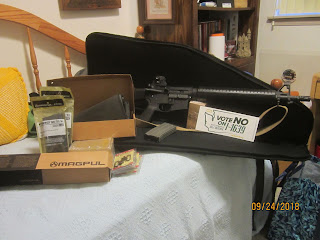 It was interesting driving up in the commute around Seattle and even more so to find his home in the maze of streets, which often ended in a dead end with the promise some day there would be a road to link. Ah, ten minutes later than I had planned I found him and a small dog waiting for me. Invited in and he has on the kitchen island, a shopping bag full of magpul parts, 2 new 30 magazines, one twenty rounder, and 360 rds. Plus another pistol grip and butt stock. And a soft black gun bag, so the little stuff was left in my car, and we were off to see the man about an official transfer of the firearm, thirty dollars and some paperwork later. I now own an evil black rifle - and can hardly wait to shoot it.

He did mention leaving the 30rd mags in the packages, because there was no telling what terrible thing would happen when they got loose. I told him I had ordered three 10 round mags, because I have never loved long magazine for anything except ease of carry. Ever since 1967 a rifle with a box magazine that laid into my support arm has been unfit for me to use.  I had also dropped an ammunition order and would be waiting for it. At the store where we did the paperwork, I picked up some bumper stickers about the voting NO on I-1639, and flyers on same. One issue that Americans cannot leave to those people in power. Having watched the government and their problems with fairness, I am sure the less they do the better we all will be.

He did note how quickly my background check came back, I think it is because they have a fat file on me. I worked for them for a long time, and now my son is working and having to get and keep his clearances up to date. Judging from all the ribbons he is wearing, his file is twice as fat as mine. Ha, ha!
Posted by Earl at 7:23 PM 4 comments:

I am only a two issue voter, but then I know how everything works.  Money buys power, it is a reward and a tool of the elite and they will never care about the basket of deplorables (how did Hillary spell it?), those of us'ns living in trailer parks and under bridges. But I don't really support those that have no honor, sense of shame nor Boy Scout characteristics. I will pray for them, but they get no money and no votes from me.

So toss out what is in the news. Just remember what you support and find the candidates that are supporting what you think is important. Both major parties are doing bad things for their seats in power, they are both hiding stuff. And they are all lying about their record, promises and character - maybe.  In Washington and many other states large sums of money are pushing activity against the Constitution and the amendments to the basic law.

Anyway, I am close to deciding to buy an AR and need some solid recommendations. I took a look at Daniel Defense v7, and was interested but appalled by the prices, sigh. I am such a cheap old man.
Should ask my son, still serving, about what he and his community think would be the perfect home/vehicle rifle/carbine that he would recommend. Has to be my size.  If the current anti-gun infanticide loving Democrats win big (and the Republicans have no spine nor Constitution restoring agenda).  I will be heading to the gun shop to buy before they think they can stop me. Always have known that when the revolutions come, we march on Fort Ticonderoga to get the King's guns.
Posted by Earl at 6:49 PM 1 comment:

Guilty as charged, banished. When I was a young man, I carried a knife and everyone knew it, and some boys accused me of threatening them with it. And the people listening believed the story... and I was banished from my adopted home away from home... It was traumatic, the family had taken me in as an older cousin, big brother/baby sister, friend and home work helper. It wasn't a good time for me. But there was still school, my own family and part time work and my reading and dreams and whatever.
The boys returned, told the truth and I was welcomed back with cautions and lots of love... I learned about running a muskrat trap line and skinning them, a buck a piece. Substituting on the paper route for one of the children, helping Lois clean her kitchen work table, I did half of it. She called my mother and told her to send me back to finish the other half (best practical joke I ever did). My little brother woke me too early and I left home and went and slept on the porch furniture and their grandmother asked if I was a homeless boy when she found me out there.
But it always bothered me a bit that the mother, who trusted me alone with watching over her home and children, decided that I had done what I was accused of with my pocket knife. I couldn't prove what never happened, I could only continue to grow up and make all my own mistakes.

So, with the cynical 'believe in nothing and nobody' culture and media circus, I know that the Judge is unsettled. The people that know him are not doubting him. Being a fair man and trying to believe the Doctor is a lady, the poor woman is just mistaken and needs lot more help is my opinion. I can't prove that either. I did see her lawyer say that she isn't against the Judge going to the Supreme Court, although that wasn't her recommendation. Don't worry, say your prayers ask for forgiveness for all those things that only exist in the minds of others. I have long believed and repeated that a reputation is very difficult to live up to, nor under as it grows in the minds and tongues of the unknowing.
Posted by Earl at 11:55 PM 3 comments:

The game is becoming boring, only need to show up twice a day... 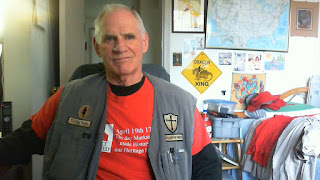 So how is life really on my end of the internet? It is fine, sure there are some challenges, but nothing that fewer carbs, more exercise and rest and constant medical interventions won't delay the end. And among the things I can help, the end isn't one of them. Still enjoy teaching Sunday school, and AWANAS has started back up. So I am getting a good dose of youth to balance the old veterans sitting around telling war stories. I do get some fine opinions, ha, ha.
My wife continues to do her church and volunteer work, says she won't leave me in the Washington Soldiers Home, we have some of our Sunday School classes that visit there also. Everyone should visit before the only chance to see them is under their headstone.
Remembering that it has never been anyone else's fault that I consume too much, a modern problem of the indolent old men... I want to get a better vest, I wear the work ones because of pockets to fill with stuff I couldn't find on the other side of the belt and belly. A proper waistcoat... like Men's Wearhouse would have what I want.  Sunday night, I am listening to the Blues, although I was happy to see Stanford defeat USC. Time for sleep. Good night, all and y'all.
Posted by Earl at 10:11 PM 1 comment: