Difficult to know what you are doing is wrong...

Or at least not effective... I got lost in the fog around Post Falls, Idaho - I do mean completely totally and foolishly lost. Just looking for a range I had visited more than once, a few years back. Being a guy, I never stopped to ask directions, never doubted that I was on the correct roads, never knew it was going to take so long to figure out I had best start all over with better information, directions and a bit of prayer. If I had just had a woman with me, she would have straightened me out quicker, yes, she would have. I did regroup, and drove right there to arrive before the cased rifles would get to the line.

Kind of like having that buddy, watch your shooting technique, your dance routine, or the poor choir director noticing you haven't found the proper key to sing in for that hymn. What is a key for anyway? Just to open a door, if one hasn't a big ugly guy along to do it for you.

The picture is of the Sun shining on the shooting, this is not a qualifying Winterseed by RWVA standards, it is only an Idaho Springbreak (in the weather). 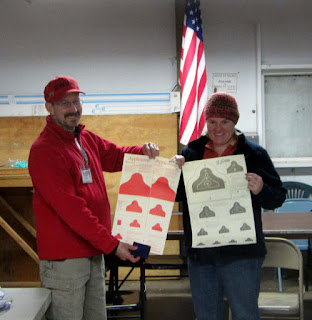 Her second Appleseed, with two cleaned Redcoat targets and her Rifleman AQT. Her husband mentioned that he would be looking for a new 10/22, since it seems she has adopted one of his favorites as her rifle. 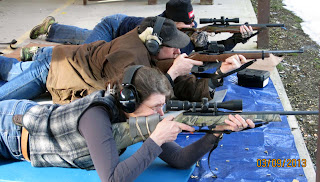 It wasn't all 22 caliber, we had three .223 shooters. The second day Known Distance was fun, all the way out on the crunchy snow to the 200 and 300 yard lines for the racing heart beat. 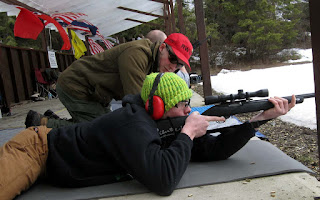 By the second day, there would be a total of seven Riflemen shooters, of nine participating, and I would head home, five hours away , with a happy feeling about my Stevens Armory model target rifle awaiting my pick up at the gunsmith's.