Time keeps moving on, and I am falling backward... or just happy to be here...

So this weekend, we had a fine Appleseed at Coupeville, WA. on Whidbey Island. Which means ferry boat rides on and off. I said hello to the ticket sales lady on my first day, and had a fine longer conversation with the man selling on the second day, since it was early and no one was behind me. Day two was about how America was changed and everyone was alone and we needed to talk more everywhere - the kind of conversation that fit because of the shootings in Pittsburgh and the mad bomber from Florida. We didn't solve the lonely (my wife is away) but we did start the conversation and kept it positive. 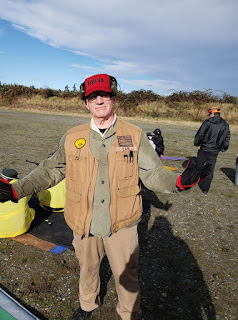 I know I am getting older, great picture was taken of me by Ben, and I love it, although it isn't as beautiful as I think I am. But ten years of wear on the Appleseed Trail will do that to a fellow. It pays so well: smiles, thank yous, and 'we will be back's. Trying to remember any people I met that I wouldn't be happy to see again, and can't think of even one.

So with rain promised for the weekend, we showed up to greet 14 shooters to present instruction, history and build the heritage that seems to be missed by current culture. They came as groups, family and friends, to learn to shoot well and improve their understanding of marksmanship. Nine of them confessed to being beginners, and we would spend some extra time getting them into the marksmanship, but I know that it was worth it, the shooters that improved quickest were the ones without experience and skills built strangely to overcome.

Don't know how to stress that there are things never seen in movies and news reports about firearms. They do have weak springs, fail to extract, double feed, and ammunition fails to fire when primer is struck lightly or the primer wasn't applied uniformly. It is all part of shooting that experience will help over come quickly and confidently. There were the adjustment challenges, I do need to study those YouTube videos about the strange slings I run into more and more now, they should work.

We never got the soaking rains and high winds I have been under before on this range. Luckily, the weather blew in and blew away, so little lingered that we thought just a little shivering was not having an effect on our performance... it was chilling me and sitting on a wet directors chair wasn't half the fun of laying down in a puddle of water on the tarp laid down to keep one from the dirt. At least the shooters had a chance to shoot. Will got to shoot to demonstrate how he would shoot the AQT, we aren't sure it was effective. But he liked getting an opportunity to fire his rifle.  Mike showed up on the second day, riding his Gold Wing, bringing me a training aid book that I had left on the range at Port Townsend a while ago, Spring? I had been looking for it, figuring it was gone with much else of my mind. Still have a shooting mat left behind in Idaho from a couple years back.

On day two we reviewed everything, the shooters much more interested in making sure they understood why they weren't hitting tiny groups on the target they were engaging. We did some drills and presented transitions to add to challenge and difficulty of meeting the time standards. The groups had the normal slowing down and being supportive and competitive as they always are. Which translates as good and bad. One young man was having trouble concentrating on his shooting, but his distraction was really learning, she had mentioned knowing nothing about shooting but she was learning quickly. Looking over the young man's AQTs on day two convinced me that he was sandbagging. He probably wasn't, but he wasn't really paying attention to the course of fire. He was safe enough, and he listened well to advice and took gentle ribbing well. 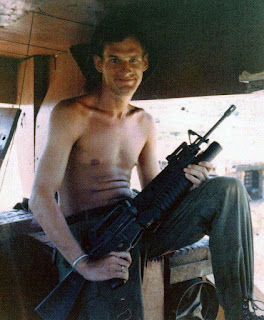 By the end of the day and during our clean up I asked him how old he was, on the roster 24, he said 23. I thought a lot about that, he had manners, potential and will do well in life, if he gets interested. I believe he will, but then I thought about me at his age - so long ago and so far away. I was in Vietnam, the third overseas assignment of my Army service, a sergeant working on staff sergeant, planning to get married after that tour. Different country back then, too. Highschool grad, college and OCS drop out... well, we learn by what we fail at and repair later. It was a very good Appleseed, even without any Riflemen earned, all the shooters learned, they all improved and I hope as their lives allow we will see them on other ranges and Appleseeds bringing friends and family to learn and hear about the history and build the heritage back into our lives.