It just gets so much better on the road and the range...

Got up early on Saturday morning, put the last rifle in the Caravan, hit the GPS with coffee and breakfast and drove off to meet the crew at Jefferson County Sportsmen Club in Port Townsend. The weather was perfect for scenic views of the Olympic Mountains as dawn broke, too often it is foggy or stormy. Kenjo has control this weekend, the Shoot Boss, nice green hat. Nineteen shooters signed up, and a whole crew, look there is CubFlyr (Al) with a young man named Jack.  It was good to see Al, and young Jack was impressive.  A lot of repeat Appleseeders, good to see them coming back for a bit more polish. Fixer would earn his Red Hat this weekend, Yankee Terrier would be instructing a lot for progress checks. TioNico would be instructing as a red hat, so six instructors for the shooters to ask and get answers from.
The day rolled right along, two sighter squares after the Redcoat in the morning, lots of instruction and a few equipment adjustments but time was good, I got to be the Line Boss before lunch, lunch time was historic background, First and Second Strikes of the Match. The first afternoon continued instruction, positions, shooting on an AQT for the different adjustments, getting groups smaller, six steps for making the shot, NPOA, timing of the shoot with the cycle of the pause in breathing. Had enough time for full scored AQTs and the Third Strike of the Match, and re-shoot the Redcoat (improvement!!!!) and more.  T-shirts and homework handed out after the Shoot Boss motivates the shooters to prepare for another fine day of shooting Sunday. Several repeat riflemen are honored and some new riflemen made - loud Huzzahs ring out for each. We clean up after casing up the rifles and putting them in the vehicles. Short meeting with the Shoot Boss about the day and the assignments for tomorrow. He is good about making sure we all get an opportunity to do some of everything.
Most of the crew will camp out on the range, they have cold running water and toilet facilities, two campers have cooking ability (a microwave?) amazing, I gobble down too many of the Hershey Nuggets set in front of me, I will be fat forever and it wasn't Al's stew that Jack, Al and I chowed down on. The stars shine, the coyotes howl and the night goes too quickly, but solid sleep for all. We get up, shaved and changed and fed again. Yankee Terrier will be bringing doughnuts and Danish more coffee and TioNico will press out some of the best. Totally spoiled but then we are prepared to properly greet the returning shooters, I have the parking lot duty.
Everyone, except two, return, and we review safety, and then bring the rifles to the line and start with a redcoat target and then sighter square to check sight adjustment and grouping. We will do AQTs, review all positions, all of yesterday's instructions, and work to bring better effect on targets. There are the ball and dummy drills and the carding of the sights for NPOA trust building. More AQTs before and after lunch, shooting the peppermint, exploding targets are a hoot! More Riflemen are made patches awarded and honors shouted out, the instructors rotate through getting some trigger time, I do find that my Liberty Training Rifle is not on perfectly, but just making sure I have and trust my NPOA and focus on the front sight, I score enough to know once I practice and sight in the rifle, I will be making it. All rounds out in time for each stage and my last three rounds on the fourth stage could be covered with a quarter. I am a happy fellow.
I go get dressed for show and tell, flintlock, hunting shirt, hat, powder horn and possibles. Demonstrate the trade flintlock that PaulW left in my care. Al comes up to hold all the stuff, I load, step by step, aim and fire at a target, and hit! Yeah, so cool. So I ask and get a volunteer to come up and do the same thing, Heather steps up and measures a charge, charges the flintlock, primes the pan, aims on the same target and shoots it - better hit than mine, still makes us all happy. So I sign and give her the target with the wrong date on it (I took my watch off to be closer to Historic period dress).
Oh, well, the three Dangerous Old Men stories are related, the Shoot Boss will get some more awards like Jack's Junior Patriot, for being a great young shooter. And one last Redcoat target and the shooting has really been improving all weekend. Everyone is tired, putting the rifles away, then doing a great job of cleaning up.  Saying that good-bye to people you have just become friends with and hope to see again, to the crew which you really hope to work with again, back to the vehicle and the drive home, the toll bridge and waiting wife (who didn't sleep at all Saturday night). Next time she comes with me, or I drive home daily. 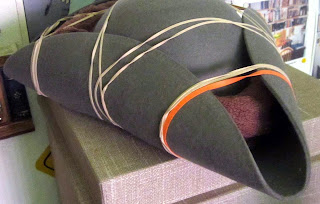 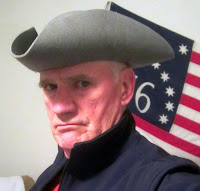 The Continental infantryman had equipment that was like that of the British soldier. In addition to a musket, he carried on his right side a leather or tin cartridge box that held twenty to thirty rounds of ammunition, a musket tool, and a supply of flints. On his left side he carried his bayonet in a leather scabbard attached to a linen or leather shoulder strap. Each soldier had a haversack, usually made of linen, to carry his food rations and eating utensils. The utensils usually included a fork made of wrought iron, a pewter or horn spoon, a knife, a plate, and a cup. He also had a canteen of wood, tin, or glass to carry water. A knapsack held extra clothing and other personal items such as a razor for shaving, a tinderbox with flint and steel for starting a fire, candle holders, a comb, and a mirror. Soldiers also often carried a fishhook and some twine so that they could catch some fish when they were near a lake, creek, or river.


Equipment of a Militiaman

The Continental army often used the local militia to help out. The militia, made up of male citizens over sixteen years of age, was the defense force of each state. Regiments of militia were called up for service by the governor or the commanding general to serve for a campaign or for a period of time as needed. These soldiers were told what equipment they had to bring with them.
The militia soldier carried equipment that looked different from that of the Continental soldier but that usually performed the same or similar function. His knapsack was generally made from linen or canvas and sometimes painted. His haversack and canteen were usually similar to those used by the Continentals. He also had an ax and a blanket.
A militia rifleman carried his rifle, knife, tomahawk—a light ax, water bottle, a powderhorn for his black powder, and a hunting pouch that held other shooting supplies. Sometimes a patch knife, used to cut a patch of cloth, and a loading block, which held patched bullets enabling the rifleman to load quicker, were attached to the strap of the hunting pouch. In addition, a charger measured the amount of powder to put into the rifle when loading.

Uniforms were a vital consideration to the armies. During this period, battles fought with black-powder weapons would produce enough smoke to make it difficult to see more than a few yards. Clouds of thick smoke would form over the battlefield. It was important to distinguish between friend and foe. Because the smoke was white, bright colors were used for uniforms. The British wore, for the most part, red and scarlet uniforms; the French, uniforms of white and differing shades of blue; and the Americans, dark blues and browns.
Congress did not adopt a Continental uniform until 1779. However, soldiers attempted to have clothing similar to the others in the company or regiment. Many volunteer companies entered the war in uniforms purchased by themselves or their commanders.
The uniform of the American soldier was made up of:
Congress adopted brown as the official color for uniforms in 1775. But there was a shortage of brown cloth, so some regiments dressed in blue and gray. In September 1778 Congress received a large shipment of uniforms from France. The North Carolina Continental Line regiments received blue coats faced with red collars, cuffs, and lapels. In October 1779 Congress adopted regulations requiring North Carolina troops to wear a uniform made of a blue coat with blue facing and laced with white around the buttonholes.
Posted by Earl at 9:17 AM