Left home early to get to the Interlake Shooting Sports range, in Renton. The first thing I noticed are the construction men waiting in their trucks to get into the area they are preparing for construction, looked like water and sewer and drainage. Neighbors are going to complain about noise and safety, but the range has been there since 1947. And the city keeps expanding, sigh.

I checked my stuff for the course of instruction, and noticed I hadn't brought my hat, nor wallet, luckily I did start the morning with full gas tank. So Andy shows up to open, has a really bad head cold sinus and won't be teaching nor staying around. But his target line was set up the evening before and with a bit of tightening no problem. Scheduled for twenty-one shooters. It will be a bit tight on the firing line. Prescott is shoot boss, Bandaid and Glock Girl, Tally and Matt and a totally new to me, IIT named Schooner. Big fellow with a beard.

Introductions, and orientation and safety rules taught. They aren't automatic yet and then they bring their firearms down to the line.  First Redcoat of the day, isn't very impressive for the group. But there are some shooters present, a few of which have been to Appleseeds in the past. When they know your name and they look familiar. Yep, back for another set of targets. I was the first Line Boss and away we went into the drill, teach one thing, shoot, teach another thing and work them through the day adding more to their skill set and knowledge.

Because of some mechanical issues, adjustments of stocks for sight alignment and just new learning with too much information to absorb - the morning was slow to move along... but a Rifleman perseveres. During lunch the First and Second Strikes of the Match were told... I always wonder if food and refreshment aren't first in the audience's mind. But we moved into the afternoon refreshed and enlightened.

We taught carding the sights to promote the use of NPOA, and to trust NPOA so one doesn't fuss the shot, out thinking the target shouldn't take more than a pause in respiration. Sitting and standing are taught, and fired, some speed drill. We did shoot one AQT, told the third strike and fired the final Redcoat target of the day, took a group picture and packed up to go home for rest, reflection and clean up of selves and equipment. We had one Rifleman from that one AQT, and three cleared Redcoat targets. A very big improvement from the morning start. 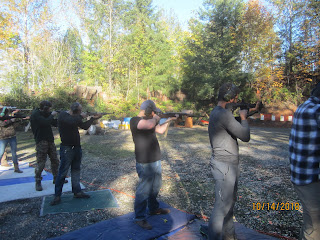 Second day, starting at eight with the check in and preparing the equipment and firing line. A little cooler but going to become clear skies and warmer. Refresh and review, First Redcoat target should have been better than the last yesterday, but wasn't. So we talk through it all, coach, advise and watch for dancing fingers, sling usage, good form. It starts to pay off. trying to conquer one problem at a time, and the groups start to shrink as the shooters start just doing the six steps without thinking about all the excess wording and sage advice given. Rifleman's cadence and speed drills for transitions pays large as the shooters have only enough time to drop find target focus and squeeze the round off and follow through. Keep it simple, no magnifying your fears and frustrations, just not enough time. Three Riflemen made (Ray, Bruz and Liana) and honored on the first AQT of the afternoon. Ball and dummy drill, more AQTs and Known Distance knowledge presented.

I hope the familiarity with their rifle and our instruction, coaching and tips will combine with the history of April 19th, 1775 to light that fire of the American spirit. We can take care of ourselves, we will speak up for the right, we will engage as soon as we break free of digital distraction devices. Good luck, keep the faith and honor our heritage. Hope to see y'all on the range, some where in our future and showing how well your dry practice has made you.
Posted by Earl at 6:27 PM