On the road again, CAP cadets to make into Riflemen...

I haven't been around as much as I once was, just often in the otherwheres.  So I packed my car and headed down the road to the range. Found it easily, as local as it gets for me.  Out of three CAP events we have held here, this was my best. Nothing to do with me, just that I have done one before so only the cadets calling me 'Sir' made me happy and uneasy. Difficult to believe there really are polite young people wanting to learn something. 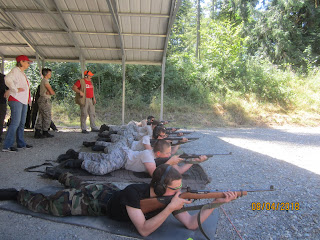 I had only one loaner rifle, and day one the sights kept coming off, combination of heat from sun, and lack of proper tension on the retaining screw? Well, the cadet was patient with me and on day two I only had to tighten it one time. I did get to fire five rounds while the cadet sat out, should do that more often, since it confirms my ability, and my errors to work upon. All the normal Appleseed things were taught and demonstrated but in a shorter version. Several shooters were improving rapidly and will one day, with practice do much better. We did have a shooter on day one do a 210 without transitions, and given a normal AQT he made 218 on the same day. He earned his patch.

NW Appleseed photo report.  Two fine days of making better marksmen.  Sunday was quick review of all that had been taught, a Redcoat target and an AQT, some dangerous old men stories. The fun stuff was in the afternoon, we brought the target line in to fifty feet (from 82) and posted NRA targets for the shooters to get scores to earn their awards based on their uniforms. Looks very much like the targets I shot in 1962 Junior High Rifle Club, in the high school gym.. under the watchful eye of Mr. Mauger, the American History teacher.