Ten years on the trail with the Revolutionary War Veterans Association, and I am ten years younger than Samuel Whittemore, in 1775.  So up early pack out and drive down I-5 to the bypass around Portland. Exit 12. Get to the gate just as Flipper drives up and opens it and follow her inside. New face, ScubaSteve, instructor from Florida - a shivering instructor. Must be airborne infantry, pack light freeze at night, is their mantra.  Nat, Flipper, Janer, Bandaid and I will make up the crew, twenty-seven shooters are on the way. Did I forget to mention Owen? A sharp young man to help with the administration both days.
Looks like two shooters per position, but the cover from sun and rain will be welcome. A couple of popups are erected on the left for overflow. In processing leads to presentation to safety steps (6 of them) and bringing the cased rifles to the line, clearing the line, posting Red Coat and the day is ready to happen. Nice bunch of shooters, very social but not too many to disrupt the flow of information and learning. 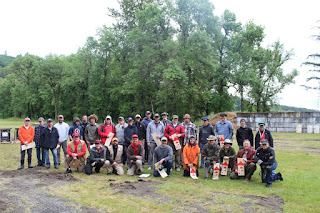 Stopped after a Redcoat for a group photograph, we don't seem to get enough of them but one has to stop and pose and you can't do that Quickly, quickly, quickly... So the instructor crew kept giving the shooters something to think about as they tried to do six simple steps for each shot, ten breaths of air, and the only rest the pause.......

Hope the shooters were inspired to practice, come again, and mastering the shooting to step up and help teach others about what they know very well about... to paraphrase Lord Percy.
Posted by Earl at 9:01 PM