Protesting everywhere for and against firearms, I answer the call of Appleseed...

Lovely looking weekend, I rise early and drive to the ferry and head for Clinton and then Coupeville on Whidbey Island. The range gate is locked when I get there, but I am early and need to rearrange my load and garb.  I remember many fine Appleseeds right here in the previous years. The crew shows up with a call from the Shootboss that he is going around the highway and bridge maintenance improvements and will be a bit late. Andy, Franklin and I carry on. I do the prehistory, what happened before April 19, 1775.  I don't notice but all the younger folks look like they have seen me before, and they have! The Shootboss and his two sons show up about nine oh nine, not very late at all. So day one starts. 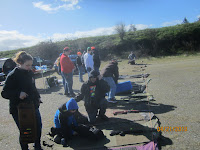 I notice all weekend that Total Participation is lacking, no one wants to be part of a chorus, they think everyone else has a better answer? Disappointing that, I must work on my choir director skill set, which I don't remember ever having. As we shoot through the morning learning steady hold factors and the six steps in taking the shot, it seems slow. Cole is having trouble using a red dot to get his rounds on paper - never having used one, I look through his sight, left handed and see that to me the sight is way off high left, to me. So we give him a large blank paper to try and put rounds into for a group. Helps a bit.  Groups start coming together and adjustments are made as we introduce instruction on the next basic building block of marksmanship.
Lunch and a working one where the First Strike of the match is told, then the second. We have so much history to present, but limit it to no more than forty minutes total. Our reference of Paul Revere's Ride by David Hackett Fisher is highly recommended, I had dragged my mobile library out for show and tell. One teacher wanted to get the title and author of the 23d Welsh Fusileers, the English unit that was in the Revolutionary war from Lexington to Yorktown. Interesting reading.
After lunch we prepare to shoot the Honor Volley for the fallen of Lexington and Concord, noting that across the nation other Applesseeds are joining us in the Rememberance Volley, I think Andy recorded it, I was noticing as I read the family names where more than one died. Tough times to stand against the Crown and Parliament, and your loyalist neighbors.
Afternoon and more positions, and instruction on marksmanship and target engagement. We are beginning to know the shooters and work on some of their challenges. Still not enough Total participation. The wind seems to wear us out a bit. But it is more that we aren't drinking enough water and are losing the concentration we should have. I notice a hawk flying above and suddenly his tail feathers blaze out in a brilliant red when hit by the Sun, ah, that is why they are called Redtailed Hawks. Franklin, who grew up on the island, mentions knowing this for a long time.  All the adjustments and the instructions are beginning to show improvement in the shooting and groups. The Third Strike of the Match is presented to get Lord Percy's rescue party and Col Smith back to safety and the siege of Boston by irate militiamen. One Appleseed Qualification Test and a Redcoat and we clean up the range to prepare for tomorrow.
Good food, good instructors dinner, and great rest for the night. 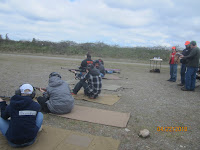 Day two, begin it all over again, refresh and review, safety and get the cased rifles to the line. There are three AQTs shot in the morning before lunch with dangerous old men stories. Andy adds two stories about ladies of the Revolution, and I want to talk about the two sharpshooters in Boonesboro during the Shawnee Mingo attacks but that is a bit far from Boston but really in the same period of history.

Afternoon shooting was mostly some drills to confirm zeroing and shrink group size. Trying to find the key, each shooter has different challenges and we do cover Known Distance as the Sun beats down. Lovely day, but winterized Washingtonians forget about sunscreen until it is too late. So final AQT and Redcoat and case rifles and clean up, pretty happy group of folks, shooting in the sunshine will do that. Sent everyone home hopefully looking forward to do it all again, after much dry practice. Since lots of people had come to the island for the weekend, the afternoon ferries were packed and long lines of waiting vehicles on the shoulder.
Need to unpack the car, check the internet and have dinner and more sleep. Can't find my camera, but it did get home with my other stuff.