The day after the Vote... 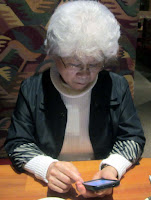 Yesterday, I went off to the YMCA, to get a coach to show me the new routine, but they aren't prepared. As I walked to towards the double doors I saw a couple leaving the old man slowly going to the car in the handicap spot, the little elder lady carefully, slowly placing her feet as she danced with her walker. She was not happy, so I gave her a bright cheerful 'Have a beautiful morning!' And her face lit up, with a smile saved for the gallant knights arrival - just in the nick of time. She was so beautiful in that welcoming of my greeting. That made my day.

I often tell young girls that only their smile will keep them beautiful, but they are too young to understand, they believe in makeup, dieting, dancing and surgery and dental alignment devices. But it is the smiles men will come back for. Since they are often disturbed by some young fool's teasing and taunting - never realizing that it is to get the girl's attention and then a smile. I will have to go back to Tom Sawyer to find out how Mark Twain wrote about that. 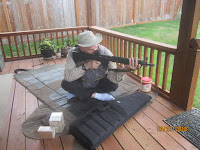 Washington's election results weren't published until 8 PM. Too many misinformed people voting about things they know nothing about. I guess we are going to the Supreme Courts of Washington and the nation. Both Constitutions prohibit government infringement of the right to keep and bear arms. Different words. The biggest problem is there are too many people living in fears of their entertainment and news media promotions of the dangers of Assault Rifles, semi auto rifles, mental health of humans being treated for mental problems. Lots of rich guys pushed it, but the entertainment and news media had prepared the minds for thinking that legislation would prevent the next mass killing. But it doesn't. Promoting love of all ones' neighbors, strangers at the gate and one's self -- even promoting good manners and quiet behavior would help. But they are going to send the law enforcement forces into battle against the law abiding citizens with these terrible dangerous firearms and people will die. But we are all going to die, and once you launch the ball, the attack, the raid, the action to win your game - it all comes up against the other side, team and their reaction. No one studies history any more. We will be going to court first but gun raids have already caused the death of the gun owner denied.  Since most of America isn't worried about President Trump, not the alien invading masses (you don't study history enough, folks) the extra voters in this state were in resistance to the i1639. Thirty pages of feel good legislation. I am sure some of the first ARs were hidden yesterday because of the legislation, a few families are looking to move to Idaho, Montana, and Wyoming. When you got to go, you have to go.

We aren't even sure about Texas now, the big money is going to get us all if we don't watch out. One of those fine science fiction paperbacks from long ago, talked about the godless communists taking over America, and then having control of money, work and schools - they turned to the independent of community folks - the small farmer with family and faith, that doesn't have to come into town, use a phone or communicate with the government. The ones not depending on the government... Anyway, the main character was attacked and killed, can't have any independence must be dependent on the government.

Now I know that fools believe it could never happen in the United States of America - but rights never understood nor exercised may not be legal in the minds of many. And if you studied history, you would quickly see how many governments have failed to do more than kill off a lot of good citizens in their efforts to make better citizens living in the current enlightened rule of foolish elite. Killed off millions, and not too well reported. But like I said before, we all die, it is important to live well and do your best right to the end. Forgive them, for they know not what they do... nothing really changes, we forget why we wrote the law.  Gods of the Copybook Headings, Kipling?
Posted by Earl at 9:00 AM