Earl's View, focus on the front sight: It is Friday, Remember the Deployed... been there ...

Earl's View, focus on the front sight: It is Friday, Remember the Deployed... been there ...: and we are still doing that.     Today a break from YMCA, I am waiting on a service repairman. I found my powder horn, just almost where I...
Posted by Earl at 7:04 AM No comments:

It is Friday, Remember the Deployed... been there and done that....

and we are still doing that.

Today a break from YMCA, I am waiting on a service repairman. I found my powder horn, just almost where I remember it.  I think that California will have this school shooting frenzy fixed as soon as they teach the students how to live like prisoners, instead of free folks. That should fix it. They are doing so well with all their other efforts. I wish they had schools and communities like I grew up in. We didn't seem to be unduly influenced to kill others in our struggle to be important enough for love. But then I do remember starting the day with the Lord's Prayer and the Pledge of Allegiance - pre-Marxist take over of education. Not that I believe in the pledge to a godless government of goofs. I do believe in Liberty under the LORD, justice and honor. Once believed that everyone did.

Just checked out my father's Junior Class Yearbook, 1942 TIGER, Albert Lea, Minnesota. He went to the Prom, played pool and his school didn't look that different than mine, except his was really larger. Well, my wife is up - I will have to drink my coffee and make myself useful gazing at the screens everywhere. Still working on the Procrastination Pile.
Posted by Earl at 7:02 AM 2 comments:

Earl's View, focus on the front sight: Veterans' Day weekend at an Appleseed...

Earl's View, focus on the front sight: Veterans' Day weekend at an Appleseed...:    One of the best parts of being just an old man, is sharing with those that aren't. I was signed up and went to the Appleseed in Redmo...
Posted by Earl at 6:35 AM No comments:

Veterans' Day weekend at an Appleseed...

One of the best parts of being just an old man, is sharing with those that aren't. I was signed up and went to the Appleseed in Redmond to help. Saturday was a bit tough, the water was often falling the Sun was cloud covered but we soldiered on. I got to tell the Second Strike of the match and private Hosmer and Captain Davis died and Luther Blanchard would be wounded and the Revolutionary War hadn't begun yet, leave the audience hanging waiting for the third strike of the match, when it would.
Will got his Shoot Boss hat, which talented man he is he had crafted to fit him. Looks very good on him. He had his family supporting, and they all had nice Appleseed sweatshirts for the day. Ben and Leanna had come up from Vancouver, WA. Good to work with them again. I will be going down to Douglas Ridge Rifle Club to learn some Pistol Seed training later this month. We picked up another volunteer, and a new Orange Hat was presented on Sunday.
Our first day of the event was wet and cool, which to shooters that have to lay down in water is cold, no drying out possible. Sunday was better, the clouds would be fleeting and everything seemed to dry a bit, and we felt warm. Reviewed on Sunday was quick and complete and the shooters got to cranking out better groups and higher scores as the day went on.  By the afternoon, we were hollering out loud HUZZAHS! for all the Riflemen scores and Cleaned Redcoat targets. It did seem to rain success upon the shooters, made me think we must have had a lot of ringers or repeat Appleseeders, but it was just magic. Cleaned up and got to drive home in the daylight, the message of John Adams and those days shared with the shooters of our future.  All about Liberty, gentle readers.

Today is Veterans Day, and I have been posting pictures of my military veteran moments on Face book.  It has been fun, will go back to normal and family and such on Friday probably. As I was scanning through my digital photo album I ran across this October 1973 photo, a candid shot from the upper bunk of the NCO's room. I don't remember who took it. We had been alerted and assembled to respond to the Yom Kipper War (which hadn't been named yet). Like most military gatherings, at a certain point it is 'hurry up and wait'. The rumor mill said one American Airborne Division was going to confront seven Soviet Airborne divisions in the Sinai or Egypt. I wonder if the coming end of the Vietnam War had much to do with the American response, remember talking to a Ft Sill Sergeant that got his self propelled gun ready to deploy and then lost it to the Israelis until it could be replaced by another six or more months later.  We never got to find out if the 82nd could handle all those Soviet paratroopers, thank God, and maybe there were better heads than mine? But reading the Wikipedia article reminds me 'they serve who only stand and watch' or sleep under a magazine waiting for glory.

Lots of Veterans in my family and our history, I was really unhappy with our nation and the treatment after I came back from Vietnam, I was honored to serve and others had painted us black and ugly. Bad enough that our great grandchildren will never know how proud I was to serve, the country drove me to stay around for the next one because I couldn't really talk to those civilians. I remember telling a war story to a family audience at my mother's home and as I blurted out the f-word for effect my mind had flashing red alarm lights going off - right in front of my mother! I stopped using vulgarity in my conversation, until it would enhance my life. But nothing ever happened to me is always going to be my best war story. I wrote an essay title "Secret Hero" and read it at my father's memorial, but I figured everyone that risks everything for a cause is a hero, even when they don't pay the price. The hard part is coming home and being a gentle person, making a family and building a better future and at the end of a fine productive life you will be remembered for all your best. No medal nor marches needed, just surrounded by your good life and loves.

Earl's View, focus on the front sight: So a couple days before Veterans Day weekend, we r...

Earl's View, focus on the front sight: So a couple days before Veterans Day weekend, we r...:   I have an Appleseed in Redmond this coming weekend, and won't be at my church to honor the veterans, one of which I am. So I will ment...
Posted by Earl at 4:46 AM No comments:

So a couple days before Veterans Day weekend, we remember when...

I have an Appleseed in Redmond this coming weekend, and won't be at my church to honor the veterans, one of which I am. So I will mention it at Wednesday AWANA meeting, and stress the Dangerous Old Men stories on Sunday, since they seem to have all been veterans. My wife is going with other church ladies to do their day of volunteer visit to the Soldiers Home here in Washington. Our fourth graders normally say hello on the third Sunday with a trip on the church bus. I have changed my background and my personal picture daily on Facebook. As we get closer to the event the number of posts about the dead increase although it isn't Memorial Day. But fallen comrades should always be honored and remembered more than we do normally. 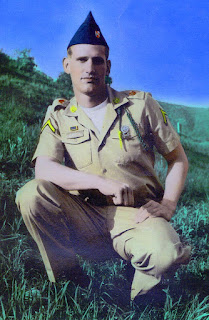 I was never as great a soldier as I could have been, but then none of them are but they are all trying. My grandfather mentioned he was in WWI, not to me ever, but he had really spent the remainder of his life being a minister and missionary and working for International Peace. My father came home and until I got back from Vietnam didn't really talk about his wartime work in the Pacific Theater. He had used his GI bill to learn how to fly, and then raised a family and flew. I often thought that America after World War II was deeply affected and moved by veterans that came back from their war determined to build a better life than that they had lived while in the service.  I do remember my father telling me that The Gallant Men and Combat on evening television were nothing like real war. I enlisted in 1967 because I wanted to be a soldier, Special Forces, having read the Green Beret and having a love of history and heroes. Luckily I didn't ever get exactly what I thought I wanted. My recruiter failed to mention that I was a year too young to enlist for Special Forces so I signed up for Airborne Infantry.

Shipped off to the Republic of Korea, where my wonderful test scores gained me a slot in an artillery battery (needs of the service) and I talked and worked my way into the Fire Direction Center after making corporal as an assistant gunner on the howitzer.  Like I said, luckily I don't always get what I want, needs of the service, and tours in ROK x2, FRG x3, RVN, 82nd ABN x3, Drill Sergeant 3 yrs, finally retiring in Aug 1994.

I was asked by a brother at church what era I was in when I served, I found the term 'era' funny, but told him Vietnam and Gulf War. His son wanted to know if we killed anyone, and did I get hurt. But you can't really tell children what they need to remember when they get older and need your advice, can you? Tell them it was important that you did the best you could while there, don't tell them how stupid and helpless you often felt. Maybe when they get older and into a service uniform and trusting you they may need your best answers - keep talking to them.

Yes, sir! Veteran of 27 yrs, 5 mos and one day. I have been thanked for my service and I do hope all of yours has been all that the Lord would wish. Mine was.